Raw, yet warm. Futuristic, yet nostalgic. Do you know what album from 2013 opens with the unmistakable sound of a modular synth? No, it wasn’t the work of some obscure electronic musician. It was the Billboard’s #2 Critics’ Pick Album of The Year: Yeesus, By Kanye West.

The modular synth you are hearing in the opening track “On Sight” is actually work of another band that made headlines in 2013: Daft Punk. Their album “Random Access Memories” (with the hit single “Get Lucky”) makes extensive use of the modular synthesizer. Modular synths are not small. They’re not always easy to move around. And they have been around for 50 years now. But musicians today are loving the modular synth. As a manufacturer of high end custom faceplates for some of today’s most popular modular synthesizers, we wanted to explore why these big boxes of knobs and wires are so popular.

At their essence, analog synthesizers are made up of pieces. Oscillators generate the tones. Envelope filters affect the timing and dynamics of the tone. High pass filters, low pass filters affect the coloring of that tone. Each piece connects together, passing sound from one piece to the next – like a highway of sound.

The problem with hardwired synths, though, is the order of these connections is well, hardwired. In a bit of a stretch for a comparison – it could loosly be similar to a painter only being able to layer colors in the same order every time. First blue, then red, then green. This would certainly hinder the possibilities. Hard wired synths limit the sonic possibilities, because you can only “layer” the pieces of sound in the same order, every time. Modular synths open the doors to infinite combinations of sound.

Composer of the “Mad Men” theme song, RJD2 has been building his own modular synthesizer for over two years now. In an interview with vice.com he describes as the “funnest processing / sound generating tool” because it is all of the elements of a synth “broken down into functions”.

Kanye West’s album “Yeezus” took the hip-hop world by storm when it was released in 2013. Much of this reception had to do with the solitary, somewhat shrilling modular synth we hear in the albums first seconds – created by Daft Punk, co-producers of the track. Rolling Stone describing this song said, “the sonic palette is as typically rich as ever”.

In a 2013 interview with BBC, Zane Lowe describes it as “one of the best beats on the record for me”. We should mention, by “beat”, Zane is referring to the usage of an arpeggio pattern that modular synths are so famous for – there are no actual drums or even drum samples. Kanye West, describing his artistic expression says, “this is what frustration sounds like”. Certainly modular synthesizers help provide that ability to express creativity.

“We hadn’t really heard anything like that in hip hop before. That may have been one of the inspirations for the minimal direction for the whole album. So we put it first, and it was really non-musical, super aggro, really noisy. I loved it, it made me crazy. A lot of people hate it — it divides people.”

Here is an instrumental version of the track “On Sight” featuring Daft Punk’s modular synthesizer. Whether you hate it or love it – it is indeed true artistic expression.

Music is a performance art, just as much as being pure music. Fans relate to bands and artists through the entire experience of a live show. Bands often use the design and aesthetics of their stage and instrument setup to share their art in the fullest expression possible. Having a modular synth on stage sends a particular message to the audience. The flashing lights. The wires. The size.

You can get an impression of the visual appeal in this phenomial live performance by Gregg Wilson on Vimeo:

The world famous band Tool, toured with a modular synthesizer for some time. You can see their actual synthesizer, a Plan B Toolbox built by Peter Grenader being demonstrated here – with all the flashing lights and wires:

If you wanted to learn how to cook, which is better? A simulated cooking program on a computer, or actually getting your hands dirty in the kitchen?

Modular synths provide this exact hands-on experience needed to more easily learn concepts of sound synthesis and sound design. In the interview with RJD2 above, he describes how this has been an invaluable learning tool for him.

“For me it’s been a great way to learn some of the fundamental things about tone generation and filtering and processing. You have to get in there and start turning knobs and patching cables to understand what’s going on. As a learning tool it’s been most effective.

Manipulating Sound With Your Hands

Unquestionably, the biggest appeal for musicians is the ability to touch the source of sound. In an interview with famous producer Benge, he describes this feeling. “The way you interact with [modular synthesizers], the physicality of them is one aspect of it that I really like. You interact with them in such a physical way that every action has a sonic result. It’s something people have gotten fed up with by doing it all inside the computer where there’s an interfacing between you an the sound. With [modular synthesizers] you’ve got a direct connection with them. The route we went down with everything being done inside the computer may have been the wrong direction.”

This is a wonderful interview, and you can watch the whole thing here:

Canadian electronic duo Orphx feels the same way. In the extended interview for the independent modular synth documentary “I Dream Of Wires” they said:

“We’d been looking for a way to make our live shows more hands on. We were really restrained by the computer. My movement for getting interested in the modular was inspired by looking for another way to manipulate sound live, real-time and feel like I was really controlling the sounds we were making. I was frustrated being in front of a computer screen, and finding that really unsatisfying. Even with a controller to operate it, it feels really limiting and I wanted something that was a bit more raw.”

Nine Inch Nails uses modular synthesizers. Trent Reznor says “It stinks [using software synths] with a mouse. Controllers don’t quite feel right, there’s still delay. It doesn’t feel the same as touching something that has a tactile aesthetic appeal to it.”

Trent Reznor from Nine Inch Nails continued, by talking about the grassroots movement and how it positively impacts the instruments:

“Eurorack and mom and pop modular world has really exploded over the last 5-8 years, it’s brought a lot of that magic back into the synth world that got lost in the [big manufacturers], and the generic most-common-denominator-workshop-scratch-sample [stuff] that’s permeated what you think a synth is now. It’s been brought back to a nuts and bolts feel with a lot of really creative interesting stuff. You don’t need a giant corporation behind them to fund some instrument that has to meet a board of people approving and whittling it into becoming a generic [instrument]. It’s exciting to see a lot of people picking up on that”.

You can hear Trent talk about this grassroots movement here at about the 5:30 mark (please be advised of the occasional use of adult language):

Sitting behind him on the left is the Doepfer A-100 Analog Modular Synth. 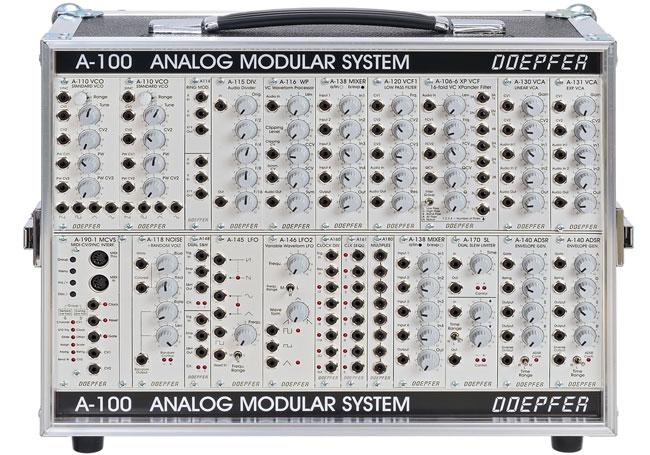 One person who’s been a part of this grassroots resurgence of interest in the Modular Synth is Peter Grenader of Plan B. Plan B has manufactured modular synths for Nine Inch Nails, as well as other artists like Tool and Guns and Roses. Aesthetics and craftsmanship are very important to manufacturers like Plan B. 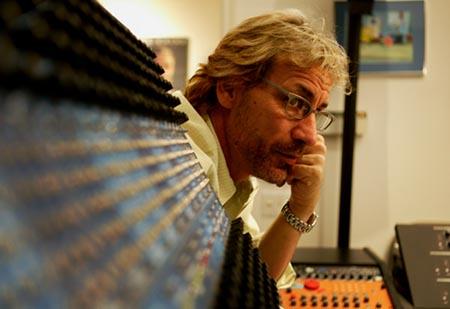 Peter says: “I’m an ex-art director who has received praise on my panel designs, which are heavily affected by visual acuity disciplines.”

The choice of material is important as well. “I used to play instruments like the sax, and within months my perspiration destroyed the outer plating in the areas that I regularly touched…That’s when I began to understand the durability of metals. When I began producing Eurorack modular synthesizers, I chose MPC’s Metalphoto® anodized aluminum because the graphics are sub-surface and easy to clean.” Musicians like how Metalphoto aluminum retains its shine. You can easily clean the faceplates with simple window cleaner. Additionally, the high resolution and contrast makes it easy to read, especially in dark stage or studio environments. If you can’t see the controls of your instrument, that doesn’t really help the creative moment. 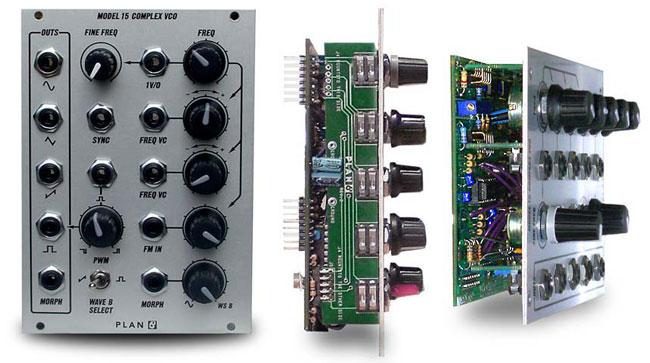 Peter is referring to the Eurorack (video intro here) – a new format of modular synths that are smaller than the original large modular synths we normally picture talking up an entire room. The eurorack is not a single company, but a standard of size and specifications. Since it is smaller it offers musicians more flexibility for transporting and usage in a studio.

The synthesizers need to be perfectly built.  “A big selling point is that MPC has the internal facility to punch the holes for the knobs,” Peter says. “The faceplate needs to cover a circuit board and all controls have to be centered. MPC’s engineering department makes sure that the pdf file I send them with my artwork lines up on the panel. That precision and due diligence has saved me in the past from making an expensive mistake.”

We’ve enjoyed being a part of the re-birth of modular synthesizers. As you can see, artists find a lot of benefits and artistic satisfaction from creating sound with their hands. You can learn more about our custom faceplates for the audio industry here.