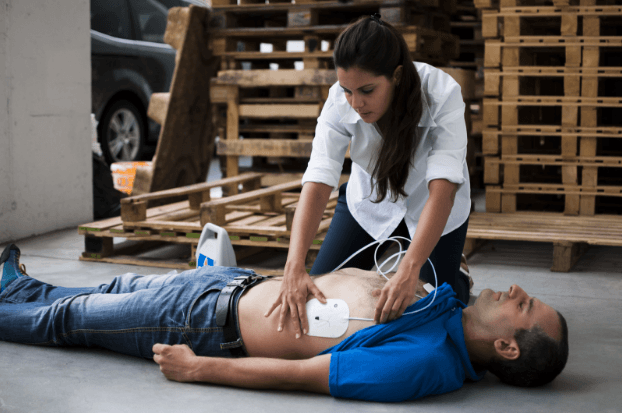 When only a few seconds separate life from death, a clear medical device instruction label is crucial. Life-saving devices such as automated external defibrillators (AEDs) are not only used by medical professionals, but also common citizens who suddenly and unexpectedly find themselves in dire situations. While working frantically to save a life with an AED, the last thing anyone needs is a faded or illegible instruction label. This is why medical device labels meant to withstand harsh healthcare environments and remain perfectly legible have life-saving importance.

What is an AED?

An AED checks the rhythm of a person’s heart1, and if irregular, sends a shock to restore normalcy. Portability and ease of use make AEDs very effective at saving lives, and because of this they are commonly found in healthcare facilities, golf courses, malls, airports, hotels, and other public places. Every AED has a procedure identification plate with specific instructions to ensure that anyone can use the device. 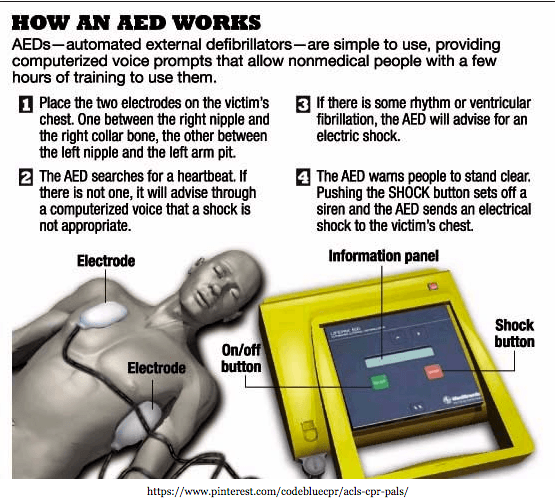 The Science of Defibrillation

Defibrillation is the term used to describe the process of externally shocking the heart. Ventricular Fibrillation (VF), denotes an abnormal heart rhythm. AEDs analyze the rhythm of a patient’s heart, and if irregular, electrodes placed on the chest administer an electric shock.

The machine will not elicit a shock unless it detects an irregularity. The shock interrupts the immediate beat cycle to restore a healthy rhythm. CPR (cardiopulmonary resuscitation) has a low success rate (less than 5%)1 when a victim faces sudden cardiac arrest (SCA). However, the chance of survival increases drastically when CPR is combined with the use of an AED! 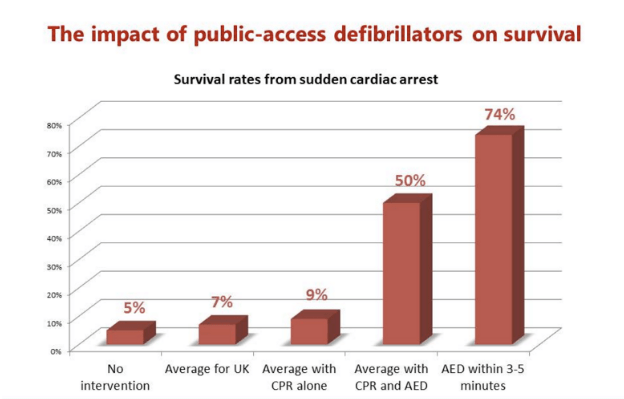 During the day, most people are not at home—they are in public areas. While AEDs are available for the home, based on statistics, it’s much more useful to have them handy in public spaces. A study by a team of cardiologists in India found that 64% of SCA victims were stricken during the day, especially in the morning2. Of the 123 victims, 101 were men above the age of 40 and with one of five contributing health issues: diabetes, hypertension, family history of heart disease, tobacco addiction, or inactive lifestyle. The doctors who completed this study encourage the public to learn CPR as well as how to find and use an AED.

Sudden cardiac arrest also affects children. In 2005, a 14-year-old freshman died during basketball tryouts after she collapsed on the gym floor3. The young girl did not respond to CPR as emergency personnel arrived 12 minutes later. In 2014, the Puget Sound Heart Project donated AEDs to every Tacoma high school.4 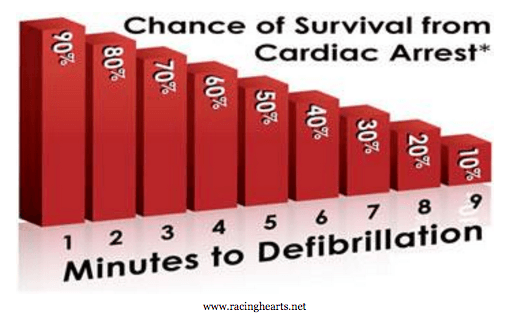 Get to an AED, Fast

AEDs are commonplace in public areas, but they are only as effective as bystanders are active! 90% of victims survive when treated with an AED in one minute or less, but chances of survival significantly decrease with each passing minute. While many people wait for trained personnel to address the situation, a Johns Hopkins study found that speed is more important than training.5 Non-medical volunteers were more successful at saving lives than trained EMTs because the volunteers had time on their side. Early defibrillation can double a victim’s odds of survival. A University of Washington study found that sixth graders successfully revived a mannequin only 23 seconds slower than professionally trained workers.6

A lack of knowledge of AEDs as well as concerns of further harming the victim are among the most common reasons for inaction. However, awareness is spreading. For example, the PulsePoint app7 that helps smartphone users locate available AEDs is used by 75% of California, is present in 26 states and 1,600 communities, and has 750,000 active users.

What are the FDA’s Specifications (or Requirements) for Medical Device Labels? The FDA defines medical device labels as any printed matter that accompanies the item and includes product labels, packaging, and any other written, printed, or graphic material on the item’s immediate container. Requirements related to medical device labeling are found within Title 21 of the Code of Federal Regulations (CFR). The regulations are broad and cover a large variety of medical device types and use cases. The FDA has specifications for general device labeling (21 CFR Part 801)that  includes definitions related to the information that must be clearly visible on a device. This section defines not only the required information but also important exemptions for additional requirements for specific types of devices. There are also guidelines related to symbols that may be used and the change control and documentation process for properly managing medical device product labeling.

Another important section is 21 CFR Part 830 that defines UDI label requirements. The UDI includes identifying information such as serial number, expiration date, and lot number that can be used for tracking and change control purposes at any time. These labels protect consumers and standardize this core information among medical device companies across the healthcare industry. Medical devices are categorized as Category I, II, or III based on their direct impact on their level of life-sustaining support, importance to health, and level of potential health risk. UDI requirements have been rolled out to these categories over time, starting with Category III and finishing with Category I in 2020. The FDA also maintains a searchable Global Unique Device Identification Database (GUDID) that contains all submitted UDI information.

What Information Should a Medical Device Label Contain?

Each medical device may have a unique product, region, or market-specific regulations that govern the specific information that must be present on the product and associated packaging. One marking that must be present on nearly all medical devices is a UDI-compliant label that contains a barcode label called a UDI mark. According to 21CFR Part 830, a UDI label must contain the following information.

The Importance of Medical Labels

All of the SCA survival statistics discussed above rely directly on the AED user’s ability to operate the device quickly and effectively—training or no training. If the AED instruction label is unmarred and easily followed, the victim has a far better chance of survival. Anodized aluminum has long been a standard for medical device labels, but many of these fade or become damaged over time. There is now a better option. Metalphoto photosensitive anodized aluminum—long known to be one of the most durable materials for military and industrial labels and data plates—was recently proven to withstand thousands of sterilization cycles without fading, corroding, or harboring bacteria. 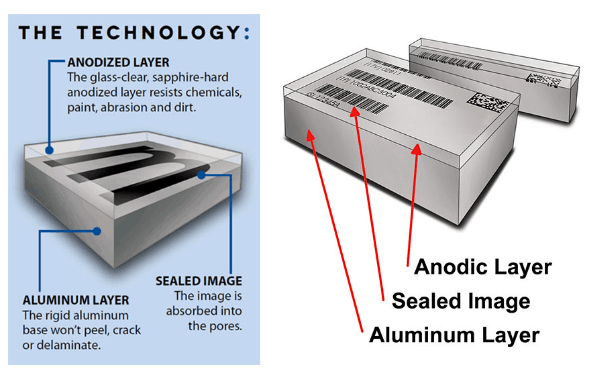 Ideal for sterile environments, Metalphoto complies with several medical labeling requirements including AAMI/CDV-1 ST79:2010/A2.06, and the FDA Amendments Act of 2007 for the establishment of a Unique Device Identification (UDI) System. Metalphoto embeds an inorganic, silver-halide photographic image inside anodized aluminum, which makes it resistant to temperatures up to 1,200°F, abrasion, and chemical exposure. Since the image is photographic it’s not only incredibly clear, but has the detail and contrast required for all barcode symbologies and UDI Systems. Metalphoto is the ideal solution in medical applications where plastic labels would break down, and screen printed anodized aluminum would fade after multiple sterilization cycles—exposing patients, citizens, and physicians to inefficiencies, frustration, and even danger.
Learn More About Metalphoto

Request a Metalphoto sample specific to your needs here: https://www.mpofcinci.com/samples