Trains helped build our nation, and created connections between far-away places that are still in use today. They come in an amazing amount of variations and perform many different functions, serving as an integral component of our infrastructure. Proud to serve this vital industry, we are sharing our picks for the world’s most incredible trains.

The BHP Iron Ore Train made the Guinness Book of World Records for the world’s longest train. The record-making ride took place in 2001, with the train carrying 682 wagons and 8 locomotives. The haul weighed-in at almost 100,000 tons. You may be thinking, “How long was this thing?” It was just over 4.5 miles in length. But some things you just have to see, watch this video showing how long it takes for the train to pass by!

The Maglev Bullet Train chugs along at speeds exceeding 370 mph. That’s 1 mile in 10 seconds! The engineering allows the train to hover above the tracks via electromagnets. Travelers move at hyper speeds while riding in complete comfort.

The longest route spanned two years, four months, 16,000 miles, and more than a few countries. The train left eastern China, passing through Kazakhstan, Russia, Belarus, Poland, Germany, and France until finally stopping in Madrid, Spain. The haul relayed goods, but if you’re interested in taking a long train ride, move on to the next section.

To date, the longest journey takes travelers on a 5,753 mile ride that lasts six days. The journey passes through several time zones from Moscow to Vladivostok. If you want to hitch a ride, it will cost you about $720.

The second-longest ride encompasses 2,775 miles, takes three days, and costs about $280 (for an economy ticket). Pass through Winnipeg, Saskatoon, Edmonton, Jasper and more on this Toronto-to-Vancouver route.

You’ve heard of double-decker buses parading around a London circus but what about two-story trains? Such an idea will address overcrowding at peak times. In London, 139,000 people stand during the morning rush hour. Engineers will work on models that are compatible with low bridges and tunnels. Double-decker trains are already in use on Swiss railways.

The Euroliner 3000 will be showcased at trade shows and designers hope to have the trains running some time between 2020 and 2022.

A lot of people bike to work, the grocery store, friend’s houses, restaurants, and more because they want to ‘go green’. But, what’s the most earth-friendly choice when it comes to long distance travel? Studies confirm rails are typically more eco-friendly than car and air travel, especially on trips that are less than 500 miles.

Japan’s Shinkansen, France’s TGV, and China’s CRH are among the greenest trains, and are often the fastest choice. A Eurostar study claims the chunnel train generates 90% less CO2 than a plane trip from London to Paris.

You may be wondering about the efficiency of freight trains. A Wired reporter was speculative about a CSX freight claim that stated the trains could move a ton of material 500 miles using only one gallon of diesel. This is especially impressive since the EPA claims a truck emits 3 times more nitrogen oxide per ton-mile than a locomotive.

The Chennai-Rameswaram route in India is one of the world’s most-dangerous train tracks, and includes a harrowing sea journey across the 1.4 mile long Pamban Bridge, which passes right through the center of cyclone territory.

Trains are continually exposed to sunlight, abrasion, extreme temperatures, and corrosive elements. Components such as the labels, data plates, and front panels must not only withstand nature’s toughest conditions, but also remain legible through years of abuse. Faded, corroded or otherwise illegible labels, data plates, and front panels can lead to unauthorized transfers, impede safe operation, or even cause downtime and regulatory fines. 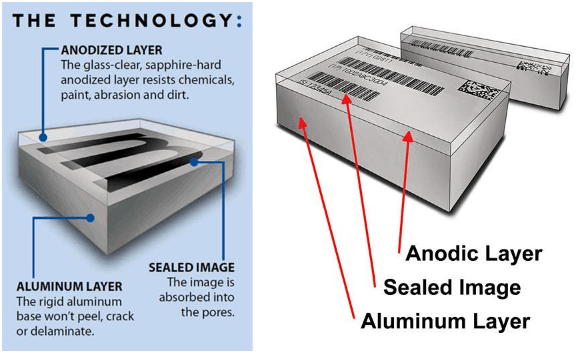 The railroad industry has achieved incredible feats in the past two hundred years, and MPC is happy to create products that play a role on these incredible machines. For a first-hand look at our Metalphoto technology, please request a sample.